Why Some Cases Settle And Others Go To Trial

My philosophy and goals as a practicing attorney can be distilled into two key elements: first, give the best service possible to clients, including returning their calls and responding to their concerns; second, get the best result possible for clients. 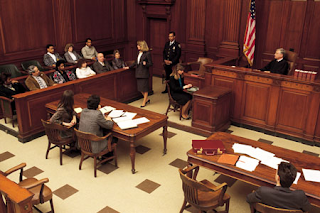 I've already written a fair amount about the first of these philosophies, but the second is important, too. Obviously, if your opponent in a lawsuit never makes a fair offer or demand to settle the case, a trial is all but certain.

However, there are certain risks that must be accounted for in deciding whether to accept a settlement vs. going to trial. Let's assume we have a case we believe can be valued at $500,000 in "verdict value," i.e. the most likely and best amount a jury would award if all goes according to plan at trial. Why would someone settle for less than that amount, i.e., what determines "settlement value?" A few factors:

Likelihood of success: if a case is worth $500,000 if everything goes perfectly, but there are facts in your case that could work against you or a witness who isn't completely reliable, the value of the case should be lowered accordingly. For example, if your lawyer believes you have a 70% chance of getting the $500,000 verdict while the other side has a 30% chance of winning outright or at least lowering your verdict value due to a factor such as comparative fault (meaning each party bears some percentage responsibility for an incident), the settlement value your case is 70% of $500,000, or $350,000. Realistically, you should then at least consider that or any better offer to settle the case.

Statutory demands and expert/trial costs for both parties: in California state courts, the parties can serve offers or demands under the Code of Civil Procedure that, if not accepted, have the legal effect of entitling the party who does not "beat" the other party's offer or demand to expert costs and prejudgment interest. For example, let's say a Plaintiff believes she can get a $500,000 verdict at trial but knows she will spend $20,000 in expert fees and costs to go to trial. The Plaintiff serves the other party with such a statutory demand for $499,000 and then wins a $500,000 verdict. The Plaintiff can then request prejudgment interest at 10% annually from the date she served the demand, and can recover the $20,000 in expert fees and trial costs she spent to get a better verdict than her $499,000 demand.

The flip side of this, however, is when a Defendant makes an offer a Plaintiff fails to "beat" at trial. Let's say a Plaintiff believes she can win $500,000 verdict in a perfect scenario, but again that she will lose 30% of the time or have her verdict reduced by 30% due to a factor such as comparative fault. If a Defendant serves a statutory offer of $351,000 and the Plaintiff only gets a verdict of $350,000, that Plaintiff must pay for the Defendant's expert fees and trial costs. The same would hold true if the Plaintiff won zero dollars, meaning care must be taken in evaluating any such offer or demand.

The lesson here is twofold: first, these statutory offers and demands are available to force parties to be realistic and reasonable when evaluating the value of each case; second, a party who evaluates such an offer or demand unrealistically runs the risk of costing him- or herself a lot of money.

The litigants' willingness to go the distance: Be it testifying in front of a jury, taking time off work, or any other among a host of reasons, some litigants simply don't have the time, interest, or stomach for trial of their case. In such cases, lawyers are typically instructed to settle the case short of full verdict value. It's important for lawyers and their clients to candidly discuss everything involved in a trial: it can be stressful, expensive, and time consuming (as well as financially risky as described above), to name but a few negatives.

Overall, the decision whether to take a case to trial hinges on these major factors. Each case is different, and each case I've been involved in that has gone to trial vs. settled has usually involved one or more of them.


Chris Gansen is an attorney practicing personal injury and trial law in Los Angeles, CA. He specializes in catastrophic injury cases and products liability. You can find him on Twitter @thegansen or on his law firm's web site, www.gansenlawgroup.com and LaAutoLaw.com.
Posted by Chris Gansen at 9:36 PM